Comfort and Strength for the Weak and Weary - Isaiah 40

Pastor JD, in a verse-by-verse study through Isaiah 40, talks about the comfort and strength that only the Lord can give to His people who are weak and weary. 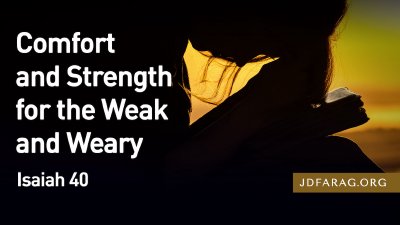 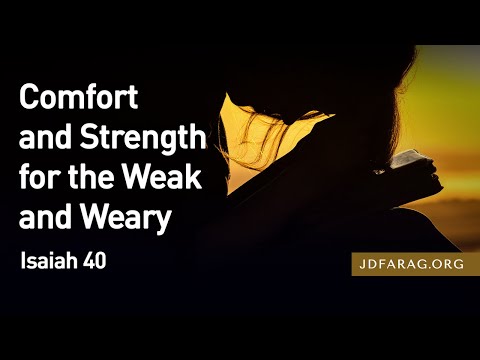 Excellent Study which I really enjoyed. It is like pastor J.D. said. There were parts of his sermon where the Holy Spirit was directly speaking to me on something the Lord has been impressing on my heart lately. It was confirmed in this study. Thank you.

What a blessing the Lord woke me up in the middle of the night to see it (Florida time) I was so fired up that I could not go back to sleep and saw it from the beginning one more time. Thank you Pastor J.D. for your teachings I am learning so much and encouraged to put into practice what I learn. God bless you and your family.

Another wonderful exploration of Gods word. Reading the book of Job today and there are some striking parallels:

11 Can the papyrus grow up without a marsh?
Can the reeds flourish without water?
12 While it is yet green and not cut down,
It withers before any other plant.
13 So are the paths of all who forget God;

12 Who has measured the waters in the hollow of His hand,
Measured heaven with a span
And calculated the dust of the earth in a measure?
Weighed the mountains in scales
And the hills in a balance?
13 Who has directed the Spirit of the Lord,
Or as His counselor has taught Him?

7 Can you search out the deep things of God?
Can you find out the limits of the Almighty?
8 They are higher than heaven—what can you do?
Deeper than Sheol—what can you know?
9 Their measure is longer than the earth
And broader than the sea.

Praise You Lord; You have measured everything even to the individual hairs on our head and You are ever in supreme command.

im very weak and extremely weary…ive started reading the Bible again from the beginning, i think this is my 3rd time and im seeing some stuff that i was totally oblivious to the 1st go around.

im seeing Abraham in a totally different light and its making me very uncomfortable. he has be deemed as “righteous” in God’s sight, yet:

so we have: no faith in God’s promises, fear and lies…THIS IS A PICTURE OF RIGHTEOUSNESS???

im not impressed and im confused.

Abraham believed God, and he was therefore judged to be in a right relationship with God even though he was not perfect. If Abraham believed God’s astounding promise, then he also had enough faith to do whatever God asked. Even when God’s command seemed to threaten God’s promise to him, Abraham was willing to obey God. But it was the faith, not the obedience, that was counted for righteousness. The attitude of heart was more important than the result.

Is this bible study area just for the current reading or can any part of the bible be discussed here?

These topics are primarily for discussion surrounding JD Farag’s video/teaching on the titular chapter/verses but in the sense that the entire word of God is connected and all paths lead to Jesus Christ any Scripture can be discussed as it relates to such.

We are not made righteousness through works, no one is good, not even one, only God- we all fall short, the greatest men of the Bible too, like David, even Moses, BUT GOD - He removes our sins from the east to the west & He remembers them no more to please Himself, what a Merciful, Gracious God we serve

Despite Abraham’s sins and/or shortcomings, God is faithful to His promise and He will fulfill it. It’s not a matter of who we are or what we have done but who God is. It is all about God’s grace and mercy to us.

So, this is all over the place so be nice! I’m thinking out loud… and looking for more imput…

None of the translations in most of bibles could agree on the colour of the robe in luke, as if too marvellous to describe, in a couple its described as bright white.
other descriptions include, gleaming, fire, brightness, appearance of a rainbow…

It’s a similar description here in
Matthew 17:2 and as they watched, his appearance changed so that his face shone like the sun and his clothes became dazzling white.

Dazzling white robes in revelation
13 Then one of the elders asked me, “These in white robes—who are they, and where did they come from?”
14 I answered, “Sir, you know.”
And he said, “These are they who have come out of the great tribulation; they have washed their robes and made them white in the blood of the lamb

Tabernacle a Holy place, sanctuary, a place of safety and being near to God.
All THREE entrances were made of the same material: a fine white woven linen with blue, purple and scarlet threads running through the material. Exodus 38:18

Although there is no blue robe, there would be a very blue battered Lord Jesus. And the tribulation saints and the remnant Jews.
Blue reference.
Numbers 15:35 The man shall surely be put to death — One reason why the breach of the sabbath was punished with such severity by the Jewish law is, that it was an implicit denying of God to be the Creator of the world.

And to remember this punishment 4 verses later…

numbers15-39.
Speak unto the children of Israel, and bid them that they make them fringes in the borders of their garments throughout their generations, and that they put upon the fringe of the borders a ribband of blue:

I know that each chapter looks from a different personal viewpoint. But is that all it is?

The punishment level that Jesus suffered in the Gospels are different I’m taking the chapter of John as the first chapter of the gospel. It’s the one that started “in the beginning” should John have been the 1st Gospel.?

Matthew has the 8 woes of the pharisees
Luke has 6
Mark …1 scribes
John none.

Is there any chance that the Gospel chapters are in the wrong order?.
John seems to be the the best place to start.
In the beginning.

So if john is 1st chapter.
Luke would be 2nd talking to those going up in the rapture and seeing Jesus in his “glory” dazzling bright.
Mark would be targeting those who believe after the rapture
Matthew would be referring to the Jews because it tells about things that the jews did,
Matthew 27… not lawful to put 30 pieces of silver back into treasury, because it is the price of blood… buy some land instead…still known as the field of blood.
Its pointing out that they care more about the law and nothing about morals …
In Matthew pilote washed his hands, no blood on my hands.
To which the jews replied
“His blood on our hands, and our children”

Ah well… I’m just glad it’s out of my head lol… I’m probably making something out of nothing… it’s just those different coloured robes!!

And why 3 entrances to the tabernacle?

I just listened to a young Chuck Missler go through the Gospel of John (free on Blue Letter Bible app) and he mentioned the different readings of the Gospels regarding the robes.

I think he brought up Isaiah 1

And of course we will get a white robe

I will greatly rejoice in the Lord, My soul shall be joyful in my God; For He has clothed me with the garments of salvation, He has covered me with the robe of righteousness, As a bridegroom decks himself with ornaments, And as a bride adorns herself with her jewels.
Isaiah 61:10 NKJV

Found this about the colours and the tabernacle. Interesting read. 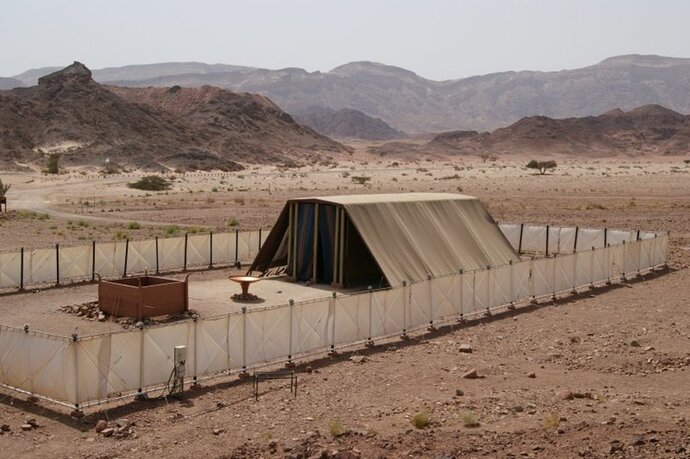 The Purpose of the Wilderness Tabernacle: The Three Colors of Thread and the...

There is nothing in Scripture that is without significance. The colors and fabric examined in this lesson will form a tapestry of meaning as it concerns the Gospel. 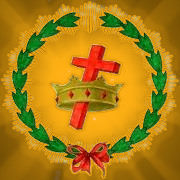 Posts about entrance to the tabernacle written by Bible Students Daily 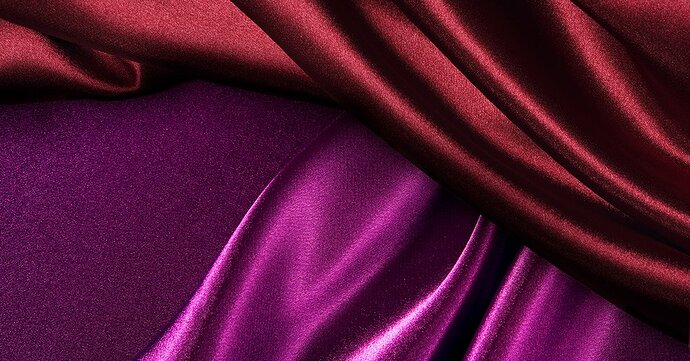 Was Either Matthew or John Color Blind?

An alleged Bible contradiction is claimed for Matthew 27:28 and John 19:2. During Jesus’ trial, he is mentioned as wearing a scarlet or a purple robe.

Thank you so much for these posts. I viewed them briefly but ran out of time so saved them for later. Looks very interesting.

Is jas in the Jewish Tanach?

I looked up J. Vernon McGee and he stated that it was undoubtedly one of Harod’s cast-off robes which they used to mock Jesus’ claims of royalty. Probably not what you were looking for but interesting

Thanks William, it drives me nuts when I see something that doesn’t add up. When I saw the difference of colour robes, at Jesus trial, curiosity got me,! I think there is a reason for it. Nothing is in the bible by mistake, But I’m so weary and worn out now, I’m just going to wait and ask when I get to heaven

ecclesiastes-4-3,
I’m reaching out to you in hopes that you’ll RE-VISIT a topic that you created in PRAYER REQUESTS last May titled I want to know f God loves me There have been several responses sent to you that you’ve most likely not seen…