I have never said in my posts that one is dammed to hell, that is between the person and God.

But that is exactly what you imply by saying it’s the Mark of the Beast.

It may very well become that, but it is not that yet.

It takes time to introduce a system and get everyone using it.

The Tribulation can’t even start until he is revealed (2 Thess 2:2-4).

We are not in the Tribulation yet.

Certainly this is the foreshadow of it. The sons of darkness are working to get it in place.

And Technically it’s a “Spork” like you get at fast food restaurants made of plastic these days.

One eye bigger than the other

Ok, why should I believe ?

You’re my brothers and sisters and many are so clueless as to what’s going on, I know you all listen to JD so you’re not clueless

Why are you obviously adding bits that are not proven biblically and then confusing them with biblical truths ?

If you are not the enemy then stop doing what the enemy does, sew confusion and discord.

All I want is confirmation of where this is coming from. If you can’t even tell me simply why anyone should accept Christ as their saviour then why should anybody liste when it comes to Revelation and what is happening now ?

You’re just trying to pick apart and critizlcize all I say it I because we have a different view about this vaccine.

That is the problem. You are taking it all out of context and emphasizing something that is not THE MARK yet.

Go back to scripture read it carefully and look at everything that is connected with THE MARK.

Very simply no antichrist revelation yet, no mark yet.

You’re not really being nice by your questions.

I have not maligned or offended you in any way whatsoever.

Stick to the argument. Are you saying that this vaccine is THE MARK of the beast or not ? Where is your biblical proof. Has the anti christ been revealed yet and are people being put to death for not worshipping an antichrist that has not yet been revealed ?

Have the Jews officially recognised their false messiah yet ? Are we still here ? I do not think for one minute that the government is trying to help me. My faith is not in this world as we are not of this world.

Jesus Christ is the only way.

I prefer what you have written because it is simple and to the point. This is what matters. My next question if I may ask, those who have taken the vaccine, is it too late for them ?

I don’t believe you did copy and paste that was not my question. Do you think that those who have had this vaccine are no longer elegibe for the free gift of salvation ?

. I think I get easily frazzled for a few reasons. First, I’m still a baby Christian. And I have a hard time comprehending Revelation and it’s order.

Might I suggest Todd Hampson’s The Non-Prophet’s Guide™ book series. I’ve read guide to end times and guide to Revelation, both great at dishing out the info without being overwhelming and his illustrations are great for visual learners. I originally thought of them being like the “____ for Dummies” books but his books are not dumbed down, just simple and straightforward. I highly recommend for both newbies and seasoned Christians. 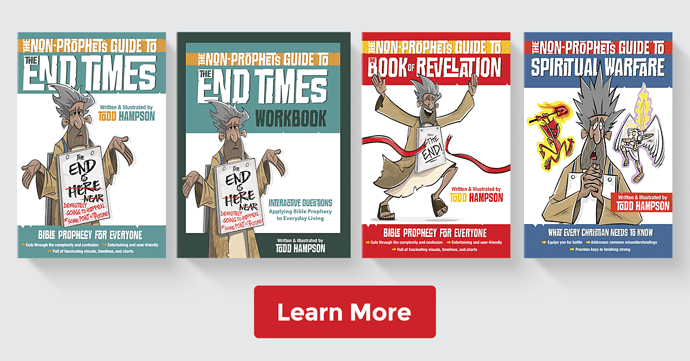 In the Non-Prophet’s Guide series, bestselling author and illustrator Todd Hampson breaks down some of the Bible’s perspective on these challenging and perplexing topics, allowing you to both understand them and rejoice in how they reveal God’s...

I already know all of this as I have looking into it myself. I will repeat my question as this has still not answered it. Are these vaccines THE MARK, has my brother or any other beleiver in Christ condemned themselves to hell and will this prevent any unsaved who have taken the vaccine from being saved.

Please back this up with scripture. This is a critical issue, why ? Because we all might as well give up now and say it is too late for anybody, saved or unsaved if they have had this vaccine already.

Ahhh…I had to look that up…you may be on to something there, too, or instead of.

Have a look at Revelation. The dividing line is there. There cannot be a dividing line when the choice has not been made apparent yet. By accepting THE MARK note THE meaning one, not many. Is the vaccine administered in the forehead or right hand ? So far as I know people are getting it in their shoulder.

Answer my question. Are THESE vaccineS THE mark and those who have taken them condemned to hell saved and unsaved alike ?

I will agree to disagree agreeably.

After ye believed, ye were SEALED with the Holy Spirit. Ephesians 1:3 We can’t physically see the seal.

Can we be unsealed ?

It’s going beyond subtlety now. Disney+ now has a “short” called “Out”. A cartoon in the kids section and it’s JUST short enough at 12 minutes long for parents to not catch it if they are busy at a task. All about a man coming “out” of the closet. So sad and sickening.

Can we be unsealed ?