My family saw the new movie, Lifemark, by the Kendrick brothers this weekend. Has anyone else? Here is further info, it plays in certain theaters through Fathom events until Thursday Sept 15th. 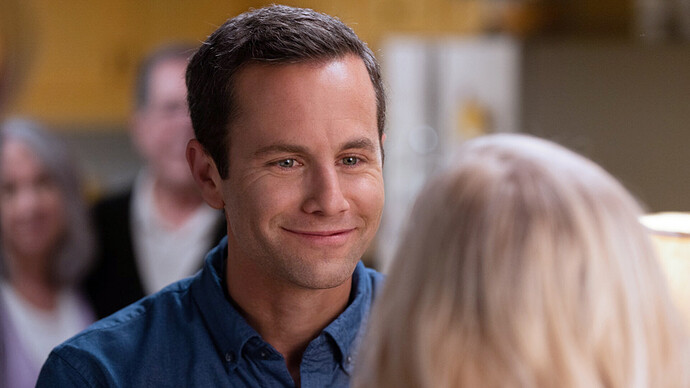 "Lifemark", a new pro-life movie produced by Kirk Cameron and the Kendrick Brothers, hit over $2 million in sales on opening weekend and marked Fathom's highest grossing event this year. 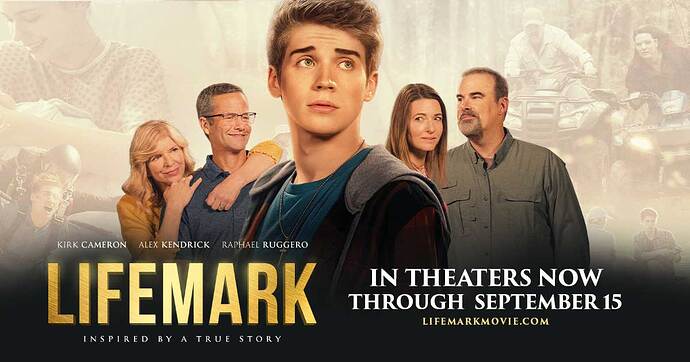 Just a question for my own information: Isn’t Kirk Cameron into the NAR church? It seems I read something recently about that. Just wondering if it would influence the message of the movie or the association with the Kendrick Brothers.

I’m not sure about NAR but quite obvious he’s one of “them”…you know, those patriotic MAGA evangelicals that the president was yelling about in his recent rant.

As the movie was focused mainly on adoption issues and choosing life, along with the forgiveness and reconciliation involved, nothing really stood out at me at all in this regard.

I don’t want to see it. been disappointed by “pro-life” movies that were really just for profit. perhaps this one is going to be good, but at the end of the day, one can see they’ve made a lot of money from it, and I doubt it’s being funnelled into a legit crisis pregnancy center or something similar. it’s just too important an issue to be satisfied with financial success, and here I see “2 million dollar opening weekend” being like the first thing mentioned.

and when it’s about profit, content disappoints. hard for even the average anti-abortion person to see. they will see all the good messages and miss the holes in the story. again it’s just too important to me to be messed with for profit. it should be made for the right reasons, and 2 million dollars in a matter of a couple days, doesn’t feel good to me. sure, cover your costs like you must. but beyond that it fails to be an act of love for the truth.

edit: I did not read the articles and I apologize if it turns out they ARE doing something good with the proceeds. I just doubt this is outside the pattern of what happened with, say, Unplanned. profit, and no healing message for those who tragically chose abortion. if this new movie is allegedly different, I’ll take back my words, but you’d have to convince me to watch it first.

I know that even secular movies can bring home some spiritual truth for us. Even if to show us how not to follow something.
Thanks for the input. I will seek to watch it when possible. Just to see what it’s about if nothing else.

Just a general question: don’t you have pills in USA for not having babies? Instead to go too late in abortion…

disclaimer: I’ve probably shared these stories in other places on the forum, so I’m sorry if I’m a broken record to some, but this is my area of expertise so it’s hard not to weigh in again when I am moved to respond to such comments.

we do have birth control pills, but unfortunately it’s not simple enough to be summed up with that logic, however true that it is. the deception surrounding the reality of abortion, is part of the problem. for example, abortion is so casually spoken of in certain circles, that I grew up viewing it as another form of birth control. I purposely tested my fertility in high school, thinking, “if I get pregnant I can just get an abortion.” I thought nothing of it. so at that point, it didn’t matter that I didn’t want a child at the time, because I thought abortion is acceptable means of preventing parenthood.

my mom had taught me when I was a kid, with very few words, that she is pro-choice, for the sake of having a choice. I trusted her and wasn’t curious enough to ask questions. why would my loving mother advocate the killing of an innocent baby, right?! I didn’t even begin to wonder about it. now I know that she was in denial of her secret abortion from before she married my dad. she didn’t want to face what she’d done. who knows how SHE had been brainwashed into what led to her abortion? and here she was, perpetuating the cycle, acting to herself that she had done no wrong. to avoid the deep pain she’d feel if she admits that it was bad for her. (she does admit now that it still hurts on a certain level, but that’s it. she still holds to the idea that it was what was best for her.)

she didn’t mean to set me up for failure. it was just too painful for her to deal with, and she did not want me to know that she’d killed my half-sibling. she never mentioned abortion until I asked her one day what pro-life/pro-choice mean. imagine having to admit your abortion to your child, I’m willing to do it, but I know it won’t be easy. I know that if she’d bothered to mention that abortion is a painful experience in general, I never would have secretly tested my fertility.

why bother with daily pills, along with their side-effects, when a one-time abortion will solve the problem? faulty logic, but I was deceived.

so that’s one example of how it’s not as simple as, “don’t want kids? don’t have unprotected sex.” the devil has been tricky, and goes beyond logic to fool people. hence, deception. and then it goes down through generations when people can’t be honest with themselves. much to my mother’s dismay, I now denounce the abortion she paid for me to have. it has forced her to reconsider what’s true, but she still hardly can.

back to the subject of “pro-life” movies, I also want to mention that Abby Johnson only went to the pro-life side because of some catholic guy bribing her with thousands of dollars to leave her post at Planned Parenthood and speak out for the Coalition for Life. you would reel in disgust to hear about how much she has made from speaking in seminars, and how she even took money once without doing the speaking at all. she was sick and wouldn’t even do a video speech, and STILL kept the ample money they’d given her for the seminar. it was all for the money, so the movie about her inner transformation, is a farce to me, and that is why I will not bother with another pro-life film unless it’s purely educational, and not from a Catholic source. hollywood-type productions just can’t be trusted by me now.

edit: I did not read the articles and I apologize if it turns out they ARE doing something good with the proceeds. I just doubt this is outside the pattern of what happened with, say, Unplanned. profit, and no healing message for those who tragically chose abortion. if this new movie is allegedly different, I’ll take back my words, but you’d have to convince me to watch it first.

I’m not even going to try. Thanks for sharing your story again, it needs to be heard. I have not seen Unplanned and from the bit you mentioned, it confirms that I haven’t missed a thing. Though this movie Lifemark did far better than I expected, its difficult for one movie to hit on every theme. This one is more focused on adoption and birth parents. It omits the reality that many families (like ours) have no hope of finding birth parents this side of heaven due to international issues. It also did not get into older child adoptions that are often quite messy and far from the rosy experiences some movies, books, etc. portray adoption to be. But that would take another whole movie to address and Lifemark is only telling the story of one real family’s experience based on a short documentary the Kendrick brothers saw of their lives.

The closest it gets to a healing message for someone who has had an abortion is the birthmom’s experience of going to the clinic, being abandoned by the doctor and staff when she tells him last minute that she can’t go through with it and then having to leave the building on her own past a group of protesters who assume she had the abortion. Beyond that, it shares her story of carrying guilt over what she nearly did, the pain of her partner not agreeing with her decision and then giving up a child she carried for nine months and the torment of always wondering if her son grew up hating her for it all.

I haven’t finished watching this short documentary yet, but it is the real story that the Lifemark movie was based on. 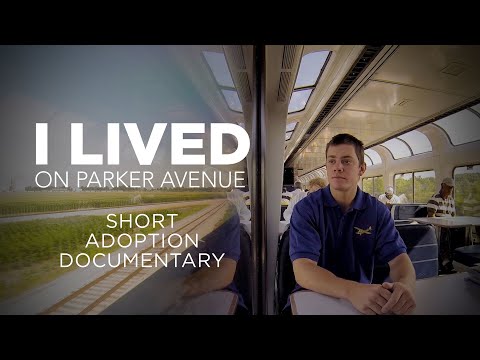 As far as proceeds from the movie I don’t know other than they did promote Carenet several times before the movie started and spoke with their CEO afterward. As for the article showing how much they made opening weekend, unfortunately that is how Hollywood determines a movie’s success. 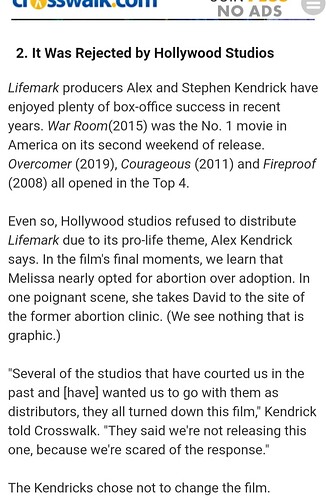 Sherwood Pictures began at Sherwood Baptist church in Albany, GA with the Kendrick brothers leading the team. Their first movie budget was only $20,000 with all amateur actors and behind the scenes people volunteering their time to make it happen. I have never gotten the impression with the Kendrick brothers that they are doing it for the money other than to make their next movie better and more impactful. If their movies are watched in order, the difference is definitely noticeable. My husband and I didn’t like the ending to their second movie, Facing the Giants, because they totally missed the opportunity to include adoption for the infertile couple, then went over the top in them miraculously giving birth to not one, but two biological kids…and being gifted a new truck and not one but two years of trophies for the team he was coaching. Lifemark made up for the Facing the Giants adoption omission and probably far better than they would have done 16 years ago.