Hello! Please go to thehealthyamerican.org asap. And follow Peggy Hall on YouTube. She is awesome!! She knows the laws and has done all the homework for you. You can get personalized exemption letters. Please go there. God bless you!

Thank you and God bless you!!!

@Saved-by-Grace, Ed, that is quite telling, indeed. Unfortunately, it flies right over the heads of the blind.

Respectfully disagree. How do we manage if we lose everything? We trust God completely, even unto death. I do believe God does care about this vax. No, it is not the mark …YET. But it is a slippery slope to begin to compromise to the point that you are willing to join the system of biometric id and receive ongoing injections. The vax passports are green only for a certain period, and then turn yellow and then red if you don’t maintain them. If we can’t take the heat and say no now, it will only weaken our resolve to stand firm as the persecution increases. Stand firm to the end, and he will give you the crown of life. Your body is the temple.

You are right it isn’t a vaccine, they even admit that it wont stop us being infected, only that it wont make us as sick - hence using up medical resources that the health system cant cope with.

I have had Covid too in January, I was extremely ill for a month and had 1 jab in April which made me ill for a week. I am in the vulnerable category due to being over 50, high BP and asthma. The NHS phoned the other day, saying they wanted to bring all second jabs forward due to the spread of the Indian variant, I have refused it as I honestly don’t think my immune system will stand for it.
In time I will probably not be able to visit my parents, family and friends etc, as they will be shedding the virus and they will put me at risk - although I am tempted to try it out and test my own limits.

Work will take a few months to catch on that I didn’t attend for my second dose - which gives me some time. My mind at least is at ease that this is not the mark. I do agree it may well lead to it with the development of ‘smart patches’.

I admire your conviction, but nobody has full antibodies to the common cold or regular flu, and Covid is from the same coronavirus family. Take care

Exactly it’s such a red flag when they are literally bribing people ! Now IU is saying they can’t require vaccine proof but are offering incentives if you provide proof lol

it’s like don’t people see what is happening ??? The really sad part is the ones deceived into pushing it as they clearly don’t know what the real agenda is In this ! Common sense is clearly no longer common these days !

That’s such a good point ! It really comes down to do you believe God and His Word as the highest authority we have here AS it’s THE TRUTH !! As well as do you actually trust Him in real time, in real life to actually live like it and make decisions that line up in living and walking by faith and not by sight !!! The narrow road is NARROW and the Broad road most everyone is on these days! Christ gave me this dream years ago where He took me off the broad road ( it’s a dead end) where EVERYONE was and took me to the narrow path, where no one was, but it led to a place of freedom and He taught me how to fly by faith ! It was amazing but I could never shake how NOONE was flying by faith !!! Even when I was flying there were times what was happening on the broad road with loved ones would draw me back down to where I was flapping my wings so to speak but going nowhere just idly hovering but even then I couldn’t do that long without losing strength I needed to sore and let the wind ( Holy Spirit ) take me!!! So we have to ask ourselves will we really let the spirit of God guide and lead us and fly by faith or are we idly standing by losing strength flapping our wings going nowhere getting dragged back down to the things of this earth and world ??? I would imagine the Holy Spirit would say to those with ears to hear: Come fly by faith with me and see the world from My perspective and you won’t get distracted by the things in and of this world ! We are IN this world not OF it ! Maranatha! God bless you !

Speaking of FEMA, while I was searching online for jobs for my son, I noticed that FEMA ads were all over the pages, and marked “urgently hiring”. So odd that I read your post…and saw FEMA news. Hmmmm…

Your husband needs to contact an attorney immediately and file a religious exemption:
(1) These vaccines are made using aborted fetal tissues. He could claim that ingesting the byproducts of abortion are against his religious beliefs.
(2) These vaccines use unproven mRNA technology. He could claim that tinkering with his body’s God-given immune system violates his religious beliefs.
Indiana University is a state entity, not a private one. His attorney should be able to help him file a lawsuit against the state if it refuses to grant a religious exemption and insists on forcing him to violate his religious convictions.

Finally, the CDC has straight up admitted:
(1) that the “vaccines” don’t prevent people from infecting others, they don’t make people less infectious.
(2) that the “vaccines” only lessen the symptoms of the vaccinated individuals, should they later be exposed to COVID.
=> Since vaccines don’t prevent spread, only lessen symptoms for those jabbed, there is ZERO REASON that any government body should be forcing vaccines on your husband. Forced vaccines will NOT protect others from your husband, according to the CDC’s own statements. It only protects your husband. And whether your husband wants to be personally protected is his own business.
His body, his choice. Period. These people claiming that people must be vaccinated to “protect others” are straight-up ignoring CDC guidelines.
=> Finally, these vaccines are NOT FDA approved. They are only “emergency use authorized.” There are strong legal ramifications for an employer forcing someone into an experimental drug that is not even FDA approved. You need to seek out a lawyer immediately.

Will be praying for you and your family.

I too heard something about FEMA lately. I was mentally preparing myself for what may come down the road, as an unvaccinated person. To that end, I thought if they were to turn off utilities to my home, they could possibly condemn the property…when I refuse the mark I will not have access to digital finances, my real estate taxes go unpaid, and I am forced out for that reason. If that happens to millions of people across the country, there will be untold homeless. In that event, the government will open the FEMA camps and force us to go. Makes sense to me–not a pleasant thought, but ,at least we’ll have plenty of friends to meet there.

Thank you !!! That’s really good sound advice !!! We’ve been praying and waiting on whether he should do religious exempt or medical. (He could do either because of his allergies to a number of things ) I wasn’t sure originally if they would allow Christianity as a religion that would deem worthy of exemption, because our state doesn’t allow exemption for “Philosophical “ reasons, like “I don’t believe in putting sickness in my body as a form of health “ but now that you say that regarding aborted fetal cells that’s PERFECT!!! The forms IU provided for the exempts are either : checking a box for religion not even a page long and you don’t even have to say what religion you are or a 3-4 page medical form. I’ve left it up to my husbands discretion and just praying the Holy Spirit will guide and lead him on which one he should do. Thanks so much for the advice and prayers !!! God bless !! Maranatha !

Try not to lay the “if” game. It just causes more stress on yourself. Ask the Lord for every moment of every day. Mt 7:7-

Check with your local State Department of Health. The type of exemptions should be stated. I know the exemption file number is called DH 680 and DH 681. These are for school exemptions like religious, philosophical and medical. Find the email on the State site, make an appointment to pick up the application, then do it. We need people to rebel against the “status quo”!

It’s in my dna

So I’ve learned how to live without it becoming a big deal. Just part of being prepared.

Fear of getting it is a powerful influence. I know many Christians who stood in line to take it out of fear! One of neighbors was terrified of getting the virus and told me she could not take the HCQ due to a blood pressure pill. If people are diagnosed early, then Z-pak antibiotic, 6-day steroids and vitamin D3 were used to fight the virus. HCQ was banned in 2020 by the FDA. Now Ivermectin is used. Fear is SO powerful even in the Christian. Crazy!

Just a follow up thought:
You might want to talk to your lawyer about covering your bases by doing both a religious AND medical exemption. I suspect lots of weird things will be happening in the courts over the next few months. Our Constitutional rights seem to be disappearing before our eyes. If one exemption is struck down by the courts, then it might be helpful for your husband to still have the other. You might want to get that now before doctors start getting scared to give their true opinions. Doctors might keep silent if they fear for their licenses or fear getting “cancelled.” It wouldn’t hurt to get your ducks in a row now, while you still can. And don’t let the school’s refusal to allow a “philosophical” exemption stop you from filing for a “religious” one. The First Amendment specifically protects the “free exercise of religion,” but has no such language for “philosophies.” During the last few measles outbreaks, states that had previously treated philosophical/religious as the same started making the distinction - disallowing “philosophical” exemptions, but still allowing “religious” ones to avoid getting in trouble under the First Amendment. Praying for your family that it all works out. Hopefully this will buy your family some time until the Lord comes.

Scary scenario. Store up your money to pay your taxes. Enlist some vaccinated friends to do your shopping. 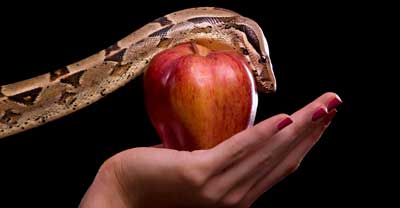 It is a refreshing experience to meet a pilgrim in the midst of our secular, security-loving age with its continual emphasis upon comfort, convenience, and compromise. We can identify pilgrims by two invariable symbols: a tent and an altar. Not that...