All Nations Will Tremble – Jeremiah 9-10

Pastor JD talks about stunning prophetic parallels with Jeremiah’s day and our day concerning all the nations on earth trembling at the wrath of God. 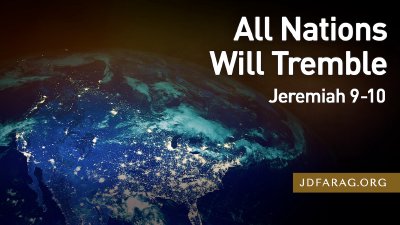 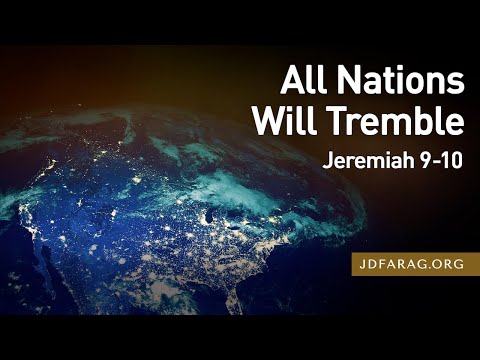 I thought Pastor JD did very well with the scripture. I look forward to all of his messages. Because of my location, I listen on Fridays to the lessons given on Thursdays. I have no counters to anything JD said of 99% of his sermon.

The 1%. First, this burr will not change anything in regard to anyone’s salvation, I suppose, but if you fall into the worshipping of all things shiny and red and black with bells and bills attached, then perhaps take a moment to reflect on your heart’s response to the “Joyous Christ’s Death” or “Merry Christmas” that occurs every December.

Which is it? Christ’s BIRTH or Christ’s DEATH?

Oh, just a common phrasing, I hear at that time by self-proclaiming Christians. They don’t mean any disrespect to Christ. Really? If they meant not to disrespect and still continue to salute others with glee of their Savior’s (Victim) DEATH at a worldly appointed time to celebrate his BIRTH, then they are most certainly confused.

Point of view.
I was raised in a Christian home that celebrated Christmas with all of the traditions of decorations, songs, and gift-giving. We had a silver tree that glistened with lights and ornaments. It was beautiful! This time was a wonderment for me. It was THE ONLY time of the year that I received a single gift. As a child, the stakes were high on what that gift might be. I scoured the Sears and Roebuck catalog, marking with my initials the items that I most would desire … I even started a star rating long before it was popular. My parents could have no doubt about what I wanted, yet, for the first eight years of my life, I didn’t receive anything that I had marked; instead, I received the exact same gift - a doll. I hated dolls. I had no use for them. I would immediately strip their clothes off, yank their heavily lacquered hair into a ponytail on top of their head, then toss them on my dresser never to be touched again. My mother had them lined up in sequence of their arrival … sort of monuments to lost opportunities of happiness. Not able to bear the disappointment any longer, I did the unthinkable on that eighth Christmas, I yelled at my mother that I hated dolls, that I never wanted to see another doll as long as I lived. To a child of Southern parents, this act put me in a position to meet the Lord, or near to it. I live. The years that followed came without dolls. They came with something from my star-rated system. “Christmas” was a complete, deliriously happy event thereafter.

Then the internet arrived. I didn’t think to research the history of “Christmas” until after my children were grown and grandchildren had started arriving. Why? I had made certain to keep Christ centered, and only spent what cash I had on gifts … many gifts … for my children and grandchildren. “Christmas” was my second most favorite holyday. I greeted everyone with a broad smile and MERRY CHRISTMAS!

It was sobering to find out what all of the colors, pine tree, all of the items used, and who ol’ St. Nick really was. It had everything to do with the winter solstice and the pagan celebration of Nimrod’s reBIRTH. December 25th is the day pinpointed by paganist as his one-day renewal. The Catholics chose to commemorate Nimrod’s birth date by covering it with the hype of Christ’s birth date. How clever were they?! Interesting, December 25th is the shortest day of the year. Whether you be for Christ or Nimrod, you have the least amount of time that day to do so. This is where “Christmas” comes in. Mass or missa, from the ending Catholic services when their priest states, “Ite, missa est.” which literally means “Go, it has been sent”. Priests dismiss the parish (define the word parish) with “the victim (Jesus) has been sent to God through the angel (which angel?), so that it may be accepted by God.” “It”? This is not a misprint. The Catholics crucify Christ anew at every Mass. They refer to Christ as It. Not the Only begotten Son OF God, but “It”. Victim? Jesus is a victim that needs the power or authority of an angel to be accepted by His Father, God Almighty? Let’s put it together. Merry equals joyous + Christ equals Son of God + Mass equals a demonization of the Power, Sovereign authority, Holiness of the Savior, and equality with God Almighty. Doesn’t sound too Christ-centered in line with God’s Word to me. Does it you?

Where’s the BIRTH of Christ in this form of yearly celebration in the way that it is portrayed?

Rather, if you are going to display items round about your dwelling, then may I suggest draping clean, virgin linen. As Christ was wrapped in strips of Priest’s linen at his birth, our High Priest. White lights to represent the pure Light of our Savior. White Lambs to remind us that Jesus is the Lamb of God born in a manger. That is all that I can think of for the exterior. Maybe others can add to the list. The rest is in the heart. As I live to each December, I, now more than ever, see the uniqueness of receiving just one gift - my Christ. God started the real star rating the night of His Son’s birth. Jesus is the only one I want each day of each year.

Greet each other with glad tidings of the BIRTH of Christ, not the horridness of “Merry Christmas”. If you have read this far and you find me in error, please, correct me.

As with so much of God’s Word the illustrative simile and metaphoric power of Jeremiah 9-10 are beyond words.

3 And like their bow, they have bent their tongues for lies…
8 Their tongue is an arrow shot out; 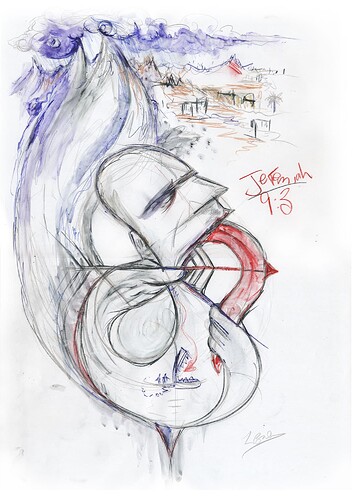 They decorate it with silver and gold;
They fasten it with nails and hammers
So that it will not topple.

Christ was fastened with nails and hammers in order to topple all idolatry. Compare also the purple adornments of Jeremiah 10:9 with Mark 15:17

10 But the Lord is the true God;
He is the living God and the everlasting King.
At His wrath the earth will tremble,
And the nations will not be able to endure His indignation.

Christ died to prove everlasting life for us.

This is God-level irony and perfection.