In a moment of sheer desperation, sleepy joe will take frauci’s advice to use porcupines to employ mass vaccination. However, the new program will be immediately cancelled as one quick internet search would have revealed to joe that porcupines are not terribly sociable animals, and they really do NOT like their quills sniffed.

All furniture in the White House will be replaced by furniture made with nerf, including the carpets.
The war room will be filled with happy fun balls and no shoes will be permitted.
Battlestar Galactica (the good one) will be put back on the air during the alien (demon) invasion.
Those not sterilized through vaccinations will be coined fertilephobic.
Chicago will have it’s city name changed to Gomorrah while New York will be changed to New Sodom

Coins made of compressed salt will become currency in states ending in the letter “U”.

Cigars described as cigarettephobic and issued only for 12 step programs related to addiction of internet oddities.

You will be able to tell they love him so much based on how they continually lift their legs to mark him.

Oh Bill Murray for president yes!! After all he stared in both ghostbusters and groundhogs day if anyone can get a handle on this crazy world its him.

Beelzebub will get a double hernia and tear his left gluteus maximus attempting to steal Zach William’s joy. As he slinks away, folks will hear him muttering, “How was I supposed to know he had an entire church choir singing in his soul?”

Because of financial cutbacks the 4 horsemen of the apocalypse will now be the 3 bicycles of doom.

Cats will finally admit they are tiny ninjas sent by the evil “alien” cat.

Bullwinkle Moose and Rocky Squirrel will run in 2024 and win as they are a protected class!

@dide100 hahaha these are great hahaha

You started this thread last December and a quarter of this year has already gone past. I thought it might be nice to review how close you came in some of your predictions for 2022.

Elon Musk will release the first ever fully green personal propultion device. People will be able to fly anywhere without the use of aircraft. It will be powered by organic beans.

Elon Musk - seems he bought Twitter for a LOT of money. Now he will be able to advertise to a lot more people about this personal propulsion device. It’s in the works.

Hmmmm. Perhaps she attended one while she is in Kiev right now. This could be happening as I write.

President Donald Trump will finally announce to the world he is actually bald and he has been wearing a hair piece for the last 40 years.

The Donald fooled you. Instead he transitioned and is now calling himself Donna. 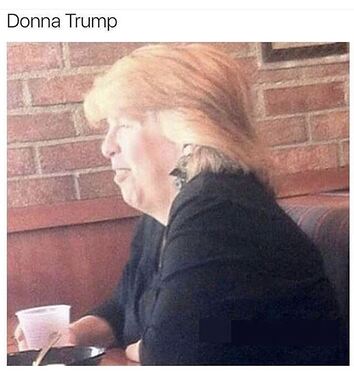 There are probably more I could comment on, but I will leave them for others. Time to revise your predictions as a quarter of the year has already past. We still have 3/4 to go and a lot can happen.

New COMMICAL Predictions for the rest of 2022

Hahahahaha Calling himself donna, that cracked me up good @DallasT

Yes, I predict he will come back as the first FEMALE President of the U.S. People will go crazy because they loved Donald but now they will love him more because they can finally have a woman in power.

I solved the chicken versus egg one long ago. There was no egg on the ark!

It will begin on January 1 and end on December 31. It will be cool to cold and wet to white in the first months turning warmer till it become blazing hot in the middle and then turning cooler to cold near the latter end. There will be a number of babies born and an number of people will pass away, and finally taxes will be paid as usual.