If you’re still active on social media platforms like Meta

you may see an increase in posts prompting you to divulge seemingly trivial personal information. Have fun but be careful. 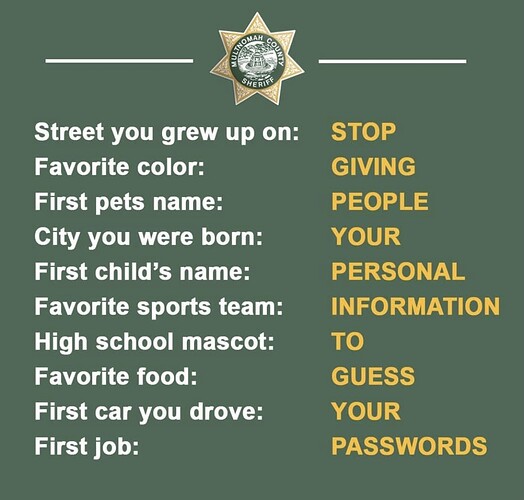 I’ve been seeing this a lot and I keep having fun posting the most vital information in code.

[I’m sorry, the vital information you have requested is G-14 classified. You do not have authorization to access. Please try again later.]

I keep having fun posting the most vital information in code.

Of course you do

I’ve noticed that the Meta logo that was almost microscopic at the bottom of the app page now is getting noticeably larger. Ever. So. Incrementally. They’re so clever!

Using the browser desktop version, I never get to see the bottom of the page lol. Hate using apps.

In keeping with JD’s latest Isaiah study that is a ponderous paradox!

I have a friend who used to work in internet security. He won’t even have a FB page. He warned us about putting up too much personal info. And he mentioned that a lot of these little fun quizzes are really just fishing expeditions by people who are trying to guess your passwords and answers to password reset questions. He said you’d be surprised at how successful they really are, they’re good at what they do.

Occasionally, I’ll play along with something silly but when they start asking things like, “How old were you in 1988”, or “What is your birth month” or “What street did you grow up on”, I’ll sometimes fire off a comment about people not giving out their personal info. Probably does no good.

I do sometimes wonder if even the page we have is too much. I do have a personal page, with something like 30 whole friends. LOL!! Mostly, it’s just family that we keep in touch with, friends that don’t live close by, people like that. We’re pretty selective about that. But yeah, kinda wishing there was an alternative that people would actually use. Signed on to MeWe for a while but couldn’t find anyone to talk to.

Yes. My wife has worked in identity theft protection and keeps me on my toes. I’ve even deleted things that I’ve posted here because I later didn’t feel comfortable. Like you, I keep a light FB page just to stay in contact with my TN friends and fam.

I keep a light FB page just to stay in contact with my TN friends and fam.

What part of the country are you in now? (Not too specific if ya don’t wanna go there.) Just curious. We do love this part of TN. Kind of off the beaten path, not a lot really close. And also pretty laid back for all of the “pokety poke” stuff and regulations out the wazzo kind of stuff. Jobs don’t pay much but costs are fairly low. Lots of drugs around, but I’m told that’s everywhere, sad that it’s that way, but it is. Mostly, we have really good and God fearing neighbors all around, and pretty much all farms around. Thinking God knew what He was doing when He allowed us to settle here. It wasn’t what I wanted (I had a 20 acre farm up the road in mind) but this is what worked. Thinking about it now, maybe He knew I’d get too attached and have a hard time leaving that place when the time comes.

We raised our family south of Knoxville just 4 miles (as the crow flies) outside the GSMNP. We moved here to OK after my mom passed away. She died in late 2019 just before everything went sideways. We sold our home in TN and moved out here summer 2020. We have relatives out here but they don’t really rise to the occasion of being family. In fact, it was a mistake to leave TN in the midst of the plandemic to move here. Maybe God will reveal a higher purpose later. Well… of course He will. But we are already working with a realtor friend of ours to move back to the Smokies or there abouts. Keep us in your prayers.

It’s hard when parents pass away. One of mine was in '17, the other in '20. I am glad they didn’t have to put up with all of this craziness. I think dad may have seen just the very beginning of it but it wasn’t what took him out. Miss him especially. Never really told him but he’s one of the few people that turned out be be an earthly hero.

I was originally from PA. Moved around as an adult, ended up settling here in TN, no family around here, just liked it here. Seems like everyone who comes loves it. But for most, there’s nothing here for them. They have jobs and lives elsewhere, and I can understand that. But no matter where we would be, we wouldn’t be close to everyone. They’re all scattered, east, west, north, south.

Hope if it’s what’s meant to be that you’ll find what’s right for you and yours. I know when I have been in the wrong place in times past, I just had no peace at all. Will certainly remember you when I talk to my Heavenly Father.

I grew up in a house, not on a street

Well I can say this, yes the internet never forgets. Now I can also say that if you have ever played those silly games and were truthful, all is not lost. Here is how you muddy the waters. Like Jon is showing you go back and play them again and each time get really wild with your answers changing them. Have some fun with it, see how many times you can come up with something silly like Jon said, “I don’t live on a street I live in a house.” Next time you could say my cave never had a paved street near it or some other nonsense. My favorite for address is 1600 Pennsylvania Ave.

So you played and put out real information and you can’t take that back but that does not mean you can’t bury it under a mess of mud. Just remember from this point forward don’t give out personal info, just crazy made up stuff and make it different every time. Even AI will not be able to figure it out.