I remember being in an early Promise Keepers meeting in the Astrodome in Houston. When I was there I was all for it. But the days after came I started to sense something wrong and that this was not the direction we should go.

Glad I sensed that then and now even more becuase that is when i 1st walked away from the wests gospel system.

Yes, so true. Paul Washer said something very similar…persecution will be for other reasons than what we have often told ourselves. Defiance, disobeying, breaking their laws… 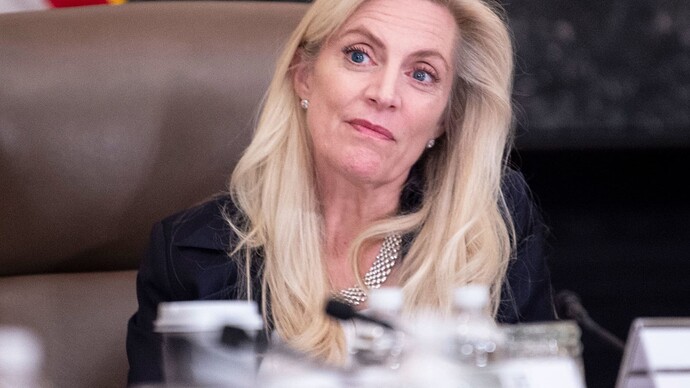 Fed Governor Lael Brainard pressed the case for a digital dollar, saying a cryptocurrency backed by the central bank could provide a variety of benefits.

Edwin from Singapore, so far there is no pressure to take the vaccine. Don’t hear much about anti vax people. I will personally put my trust in the Lord, not something manmade.

Vaccine not helping because there has been a sharp spike in COVID cases, so much so that World Economic Forum meeting cancelled. 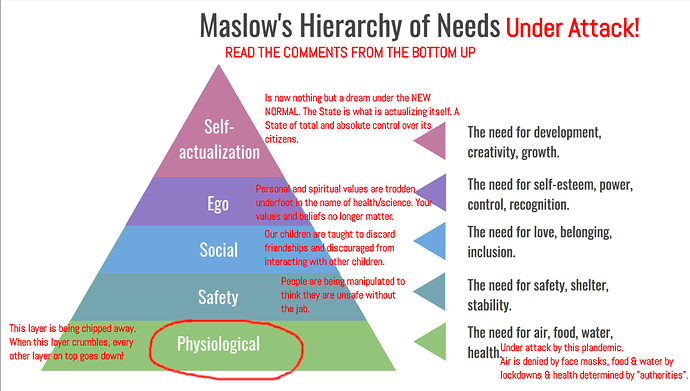 Maslow Under Attack1509×857 218 KB
Maslow’s Hierarchy of Needs was developed by Abraham Maslow in 1943 which he used to describe a pattern through which human motivation moves from the bottom up. The bottom layer is the basic motivator of man. As this is satisfied, he is motivated to satisfy the next higher level, working his way up, with “Self-actualization” as the highest motivator.
Well, guess what?
This plandemic is eating and destroying the bottom layer!
The effect of this is that it will keep people from developing into their fullest potential as persons and individuals. This is clearly a hellish ploy and is working among unbelievers. Sadly, some Christians are affected by it, too, and they’re beginning to shift their trust in the “goodness” of their government and the honesty of the health establishment (big farma).
DON’T DO THAT!
God has warned us in Jer. 17:5 “Thus saith the Lord; Cursed be the man that trusteth in man, and maketh flesh his arm, and whose heart departeth from the Lord.”
12 Likes
JackN May 25, 2021, 3:29pm #94

Back in March, we received a strange letter stating it was from the “White House” and claiming that a certain stimulus check amount had been deposited via ir s in our account. Then it said, if not present in 7 days, call this number. It was an alleged number for irs/covid at the bottom of the page. Nothing was ever placed in the acct.

Lots of scams about. Keep those Red Flag feelings close.

As I listened to Pastor JDs PUD this past Sunday I was struck by these words.
“We need to look at people as either Lost or Saved” no other “labels”.

While I understand that’s how God looks at humans, it’s a little tough for the humans to look at and determine.
In today’s society, you really can’t distinguish the lost and saved. Those who proclaim the name of Jesus, live like the world and some lost folks are more moral than those mentioned.

If I put 10 friends in a room with you and didn’t tell you if they were lost or saved, how would you determine it? By their speech? I dare say more Christians speak ugly words than what we realize.

Our mission is not to categorize people. Even lost or saved. Our mission is to tell the WHOLE World about Jesus. We can’t determine a persons heart, that’s Gods prerogative. We aren’t even qualified per se to know. Gods Word says, “…they will know you by your love for one another.” (paraphrased by me) Love is telling everyone about Jesus.

Don’t misunderstand what I’m getting at. The world IS filled with lost and saved people. My point is, it’s our mission to TELL them ALL. I mean, you can’t get a room full of people and think they are all saved. However, you can share the gospel to ALL in the room and God will then separate the wheat from the chaff.

I’m not disagreeing with Pastor JD at all, his words are true…people are either lost or saved. I’m just saying we should treat ALL people like they are lost and just proclaim Jesus and let Him sort it out.

P.S. after saying all this, I realized something. In today’s world, Christians get offended if you proclaim the Gospel and they already know Jesus as Savior…they are upset, like “how dare you judge me?”
Well, don’t you sit under a Pastor, whether online or in person who proclaims the gospel to the WHOLE congregation? Something to think about

I don’t think Pastor JD meant that we should judge another’s salvation, but to stop with the judging altogether, as in, the only thing that matters is if a person is saved or not, the perspective of salvation, rather than what political position they are, or color of their skin, or (ad a gazillion other classifications here).

Our work we are called to is the Gospel, our witness and testimony.

That’s what I was saying, although it was way more long winded than yours

Man… this week has been tough on getting the right feeling and intent of others text.

P.S. after saying all this, I realized something. In today’s world, Christians get offended if you proclaim the Gospel and they already know Jesus as Savior…they are upset, like “how dare you judge me?”
Well, don’t you sit under a Pastor, whether online or in person who proclaims the gospel to the WHOLE congregation?

You can post a scripture quote these days without comment or opinion, and start a melee with some.

I hear you! I just scroll on by most of it. My head hurts trying to decipher some of the comments.

Just to clarify, I never thought JD meant for us to judge a persons salvation.

I’m not qualified for that heart X-ray!

I’m not qualified for that heart X-ray!

Wow,
I had to share that one thanks so much.

Our resistance is not futile in Yeshua!
Shalom

Jesus answered and said to them, “This is the work of God, that you believe in Him whom He sent.”

Please read and see things as they are!

No one has ascended to heaven but He who came down from heaven, that is, the Son of Man [b]who is in heaven.And as Moses lifted up the serpent in the wilderness, even so must the Son of Man be lifted up, that whoever believes in Him should [c]not perish but have eternal life. For God so loved the world that He gave His only begotten Son, that whoever believes in Him should not perish but have everlasting life. For God did not send His Son into the world to condemn the world, but that the world through Him might be saved.

“He who believes in Him is not condemned; but he who does not believe is condemned already, because he has not believed in the name of the only begotten Son of God. And this is the condemnation, that the light has come into the world, and men loved darkness rather than light, because their deeds were evil. For everyone practicing evil hates the light and does not come to the light, lest his deeds should be exposed. But he who does the truth comes to the light, that his deeds may be clearly seen, that they have been done in God.”

Yeshua Jesus and nothing more is the only way. Your work is only to believe.

Time is speeding up the last time is now. 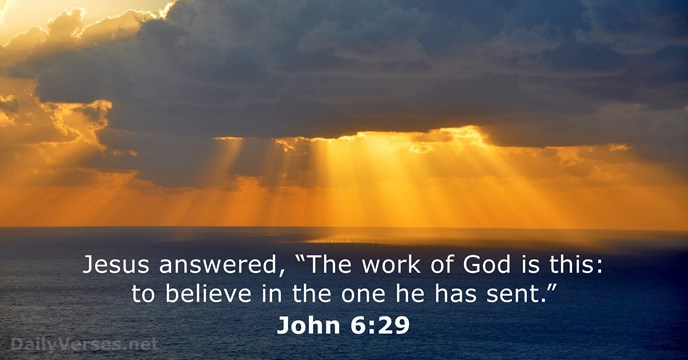 You can post a scripture quote these days without comment or opinion, and start a melee with some.

Romans 14:1 Accept other believers who are weak in faith, and don’t argue with them about what they think is right or wrong.
4 Who are you to condemn someone else’s servants? Their own master will judge whether they stand or fall. And with the Lord’s help, they will stand and receive his approval.
10 So why do you condemn another believer? Why do you look down on another believer? Remember, we will all stand before the judgment seat of God. (paraphrase)

thank you for this

That and 1 Corinthians 10 and Ephesians 5 should all be required reading for EVERY Christian every week.

Well… The Kings of the East will make their way across the Euphrates river at some point.